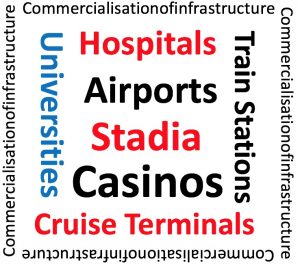 Value capture models typically involve using the tax system or land development to raise the money to fund infrastructure development.  The theory goes that infrastructure developments lift the capital value of surrounding properties – most of who have done nothing to contribute to the cost of the infrastructure provision.  These landholders experience what economists call “windfall gains” (i.e. gains you make without doing anything for them).  So the value capture model finds a way to recoup at least some of these windfall gains from landholders.  Value capture policies are usually big winners on all fronts – economics, finance, politics and community benefit!

Airports are the one form of infrastructure that have really taken to commercialisation as a form of value capture.  An airport is not a shopping centre but it has something even more valuable than that from a commercial perspective – they are places where large volumes of relatively rich people – after all you have to be relatively rich to fly, especially internationally – congregate.  In fact, there is no other place in our society anywhere so many relatively wealthy people congregate.

Take Sydney Airport for example where in 2015/16, there were 41m passenger movements – some 14.5m of which (~ 35%) were international passengers.  This is more than double the number of people that enter Westfield Bondi Junction, Sydney’s largest domestic shopping centre by sales value.

This huge congregation of what marketers call ABC1 consumers (the ones most brands want) is why most major brands position themselves at airports.  Think Chanel, Dior, Estee Lauder, Johnnie Walker, Jim Beam, Jack Daniels, Tobelerone and Cadbury to name a few.  They are at just about every international airport you can think of.

And Sydney Airport makes the most of this precious asset, capturing almost $300m worth of value from what are essentially ancillary activities – i.e. retail and food & beverage. This is money that can be ploughed into the airport’s ever expanding infrastructure needs such as runways, taxiways, aircraft parking aprons, terminals and roads, as well as into improved returns for shareholders.

So why aren’t other forms of infrastructure taking the same advantage too?  After all, airports aren’t the only places where large volumes of people congregate.  There are plenty of other places too.  Like hospitals, universities, train stations, cruise terminals, stadia and casinos.  They too could generate significant value from ancillary activities.  But many missing out on what airports have proved to be a great opportunity.

The most common objection I hear from infrastructure asset owners or at least their major users is that their assets have an operation raison d’être. Hospitals are there for sick people, universities for students and teaching and so on.  And while this is true, that doesn’t mean you can make money along the way.  From a commercial perspective, the asset isn’t the physical piece of infrastructure – it’s the large flow of people the infrastructure generates. These people have needs and wants and wallets to boot!

This is one of the reasons why The Mercurius Group was established.  To help infrastructure owners capture the commercial value from their investment.  It’s not that commercial value isn’t captured from infrastructure.  It’s just that it too often not captured by the organisation investing in the infrastructure.  How often do you see retail stores thriving across the road from places like train stations, hospitals and universities?  Those land owners across the road are capturing windfall gains. But these gains really belong to the organisation investing the big dollars in infrastructure provision.  They can and they should capture those gains.  And it can all be done without dishonouring the operational nature of the infrastructure.  Hospitals for example can add retail precincts without compromising on patient care, and if done right, the money raised from the retailing can (and should) add to patient care. Same with universities, stadia and other infrastructure assets.

All it needs is good (and early) planning. Commercial facilities need to be properly planned, properly located and engagingly delivered to create the right environment for retail and food & beverage activities to thrive.  That’s where The Mercurius Group comes in.  For more detail on The Mercurius Group’s Commercialisation of Infrastructure Practice, please contact managing Director, Mr Ivo Favotto on +61 (0) 423 564 057 or via email at ifavotto@themercuriusgroup.com

The short answer is they can and soon will do so as this non-traditional revenue stream become more important to administrators and become a fund...

How Much Retail Space is Enough for Airports?

In April this year, I gave a presentation to the Trueventus Airport Retail conference in Singapore posing the question “How Much Retail Space i...

Value Capture is a buzzword in the infrastructure world these days.  Cash strapped governments seeking new ways to fund ever more expensive infr...