Our services to Airports include:

Our experience in advising Airports include:

The Mercurius Group (Mercurius) has released the inaugural 2021-22 edition of the Airport Hotels Study (AHS). The AHS focuses on Australia and New Zealand, covering all 27 airports in the region with annual passenger volumes exceeding 0.5 million. The AHS is the first comprehensive study of all hotels within a 5km radius of an airport in Australia and New Zealand ever conducted.

Key features of the AHS include:

To purchase a copy, please fill out the AHS Order Form and contact;

The Mercurius Group, in partnership with The Moodie Davitt Report, has released the inaugural 2021 edition of the Airport Food & Beverage Study (AFABS). The AFABS 2021 focuses on the Australian and New Zealand airport F&B markets, covering all 27 airports in Australia and New Zealand with annual passenger volumes exceeding 0.5 million. The AFABS 2021 also features The Mercurius Group’s Top 12 F&B Operators League Table. The Top 12 F&B operators are responsible for 75% of the outlets within the region. 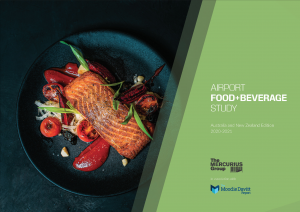 The AFABS also examines the potential for consolidation in the airport F&B industry, concluding that some merger and acquisition activity is likely.

To purchase a copy, please fill out the AFABS order form and contact;

Comments on the report include;

“The Airport Food & Beverage Study AU+NZ by The Mercurius Group  is a ground breaking report.  It comprehensively profiles both the top F&B operators as well as the F&B programs of all the major airports in Australia and New Zealand.  It is an impressive reference work that will come in handy in assessing new opportunities and in keeping an eye on our competitors – it’s the only report of its kind in our industry and I thoroughly recommend it to all those involved in the airport F&B industry including operators, airports, brands and suppliers.” John Chapman, CEO, Airport Retail Enterprises

“The team at SSP have found the Airport Food and Beverage Study as compiled by the Mercurius group to be a comprehensive, structured and insightful piece of work on our sector in the region. The report provides great assistance as a tool for benchmarking and the planning of business development opportunities. It would be fantastic to see this report updated on a regular basis. Equally it would provide huge benefit to see such a report prepared for other regions more broadly.”  Matthew Hill, Business Development Director APAC, SSP Group

TMG was engaged by Townsville Airport to assist with planning an expansion of retail space in its existing domestic terminal  through the realignment of the airside/landside boundary creating a larger airside retail precinct.

TMG was engaged by WSACo to prepare an in-terminal advertising strategy for its 10 million passenger capacity terminal to be opened in 2026. TMG’s engagement including developing on overarching strategy for in-terminal advertising, benchmarking revenues achieved from advertising, assessing go-to-market options (e.g. in-house versus concession etc) and identifying advertising opportunities with each precinct of the terminal. TMG strategy also needed to be cognizant of the overall terminal architecture as well as planned art and cultural installations.

TMG was engaged by WSACo to conduct a hotel space planning study in preparation for a 10 million passenger capacity airport being built to open in 2026. TMG’s engagement including benchmarking airport hotels from across Australia and New Zealand across key parameters including number of rooms per million passengers and typical floor plate. These insights were then applied to WSA’s pax forecast to determine overall potential demand for hotel space.

TMG was engaged by Unisuper, one of the bidders seeking to acquire 50.1% of Hobart Airport as non-aero revenue adviser, covering specialty retail, F&B, duty free, car parking, car rental, advertising and ground transport. TMG’s role was to identify both value enhancing opportunities and risks from documentation provided in both the Information Memorandum and Digital Data Room during both the non-binding bid and binding bid stages of the transaction. TMG’s advice was incorporated into the bid valuation model and consideration of risk/value.

TMG was engaged by a Cairns Airport to conduct a biannual comparison of prices across their major retail categories  against prices at competing and comparable locations including downtown retailers, other airports in Australia and other airports overseas. The price comparison covered over 100 products across Duty Free, Travel Essentials, and Food and Beverage product categories. Prices were normalised for variant sizes where such differences occurred.  Promotional activity was also taken into account.

TMG was engaged to project manage Cairns Airport’s Car Rental Enhancement Development. The primary aim of the project was to develop a plan and business case to move car rental operations from T2 into a purpose built car rental centre outside the terminal, increase the amount of ready bays and provide value enhancing options such as premium/covered parking. TMG also worked with the CNS team to optimise the ground transport plan to protect and enhance car rental value.

TMG was invited to be part of a consortium led by London based Zaha Hadid and Australia’s Cox Architects to participate in an international competition to design the new terminal at the future Western Sydney Airport, scheduled to open in 2026. TMG’s role was to determine space planning parameters for all the commercial activities in the terminal and participate in the terminal design process. The theme of the bid was to reflect the local history and flora and fauna of the surrounding area will feature landscaped gardens framing a giant public plaza, timber ceiling and vertical gardens.

TMG was engaged to plan the luxury precinct being developed as part of the Perth Airport International Terminal expansion. TMG’s role included assessing the commercial viability of luxury retailing at Perth Airport, taking into consideration pax volumes and mix, luxury brand requirements, benchmarking of successful luxury precincts at other airports and lessons from the domestic market in Perth and across Australia. TMG was then required to input into the overall terminal layout and design to create a precinct that would enable luxury retailing to be commercial viable at Perth Airport.

The Mercurius Group was engaged by Cairns Airport to assist on the $55m Terminal 2 (domestic) Reconfiguration Project.  The project will expand the T2 Departures Hall by around 50%, and increase the retail footprint by 100% (a combination of new footprint and relocating non-essential functions such as offices from the Departures Hall) with construction kicking off in Q4 of 2018.  The services provided by TMG included:

“The Mercurius Group played a critical role in shaping the design of the terminal and the retail mix to suit the needs of our passengers and retail operators, so that Cairns Airport’s customers will arrive excited and depart delighted.”

“The Cairns T2 Reconfiguration Project has been one of the best projects of this type that The Mercurius Group has worked on.  The team at Cairns Airport are fantastic. They have both a bold strategic and commercial vision as well as the willingness and talent to execute.  We set out to achieve a 50% uplift in the airport’s retail income from this terminal and are on track to achieve this challenging objective.”

The Mercurius Group teamed up with UK based retail and commercial strategy consultants, Pragma, to conduct performance benchmarking and develop retail strategy for London Heathrow Airport.  Mercurius’ role was to provide benchmarks, insights and trends from key airports in the Asia-Pacific region as input into the overall project.

The Mercurius Group was engaged by Gold Coast Airport to conduct retail benchmarking and planning for both its international terminal expansion and a proposed reconfiguration and expansion of the domestic terminal area.  Mercurius worked with the Gold Coast Airport team, architects Hassel, retail designers Geyer and cost planners to develop retail expansion teams that would generate a positive financial return to the Airport.

The Mercurius Group was engaged by Canberra Airport to review the performance of the existing commercial program (retail, F&B and duty free) and advise on options to expend the retail program and improve its performance.   Mercurius worked with the airport’s planning team and architects Guida Moseley Brown to develop terminal reconfiguration options and to conduct feasibility and cost-benefit analysis.

The Mercurius Group was engaged by Canberra Airport to prepare tender documents, conduct a potential tenant outreach program and negotiate leases for the reconfiguration and expansion of the commercial program at Canberra Airport.

TMG was engaged by Infrastructure Capital, one of the bidders seeking to Sunshine Coast Airport from the local Council, to prepare the overall business plan for the bid. Preparing the business plan required TMG to take input from various work streams (including aeronautical, non-aeronautical, operations and capital planning) to develop a consistent story-line in support of the ICG bid. The business plan covered a range of scenarios including airline traffic forecasts and associated terminal expansions and redevelopments.

TMG engaged to review PPP’s existing retail and F&B program, benchmark performance against similarly sized airports and devise a strategy to enable more retail space to be sustained and greater rentals to be achieved.